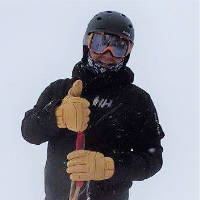 It wasn't long after learning to walk that Evan was learning to ski. Skiing fresh snow became a passion for him even as a child - and growing up in Tahoe allowed for plenty of powder days. Obsessively checking weather maps and reading meteorological journals eventually led him to making his own snowfall predictions.

In college, Evan honed his snow forecasting skills while studying at Colorado State University and skiing the Rockies. Many holidays, however, were spent travelling to Utah to ski the Wasatch where Evan found the combination of quality and quantity of snow unmatched.

Evan and his wife moved to Utah soon after completing school and they have lived there ever since. He has continued his dream of forecasting snow and skiing big mountains. To Evan, “The Greatest Snow on Earth,” is more than just a motto -- it's a way of life. In 2010, he started Wasatch Snow Forecast as a way to share the best powder days with his fellow snow-lovers. Evan brings the same quality forecasts and weather discussions to OpenSnow.com and hopes you enjoy skiing/riding Utah as much as he does.